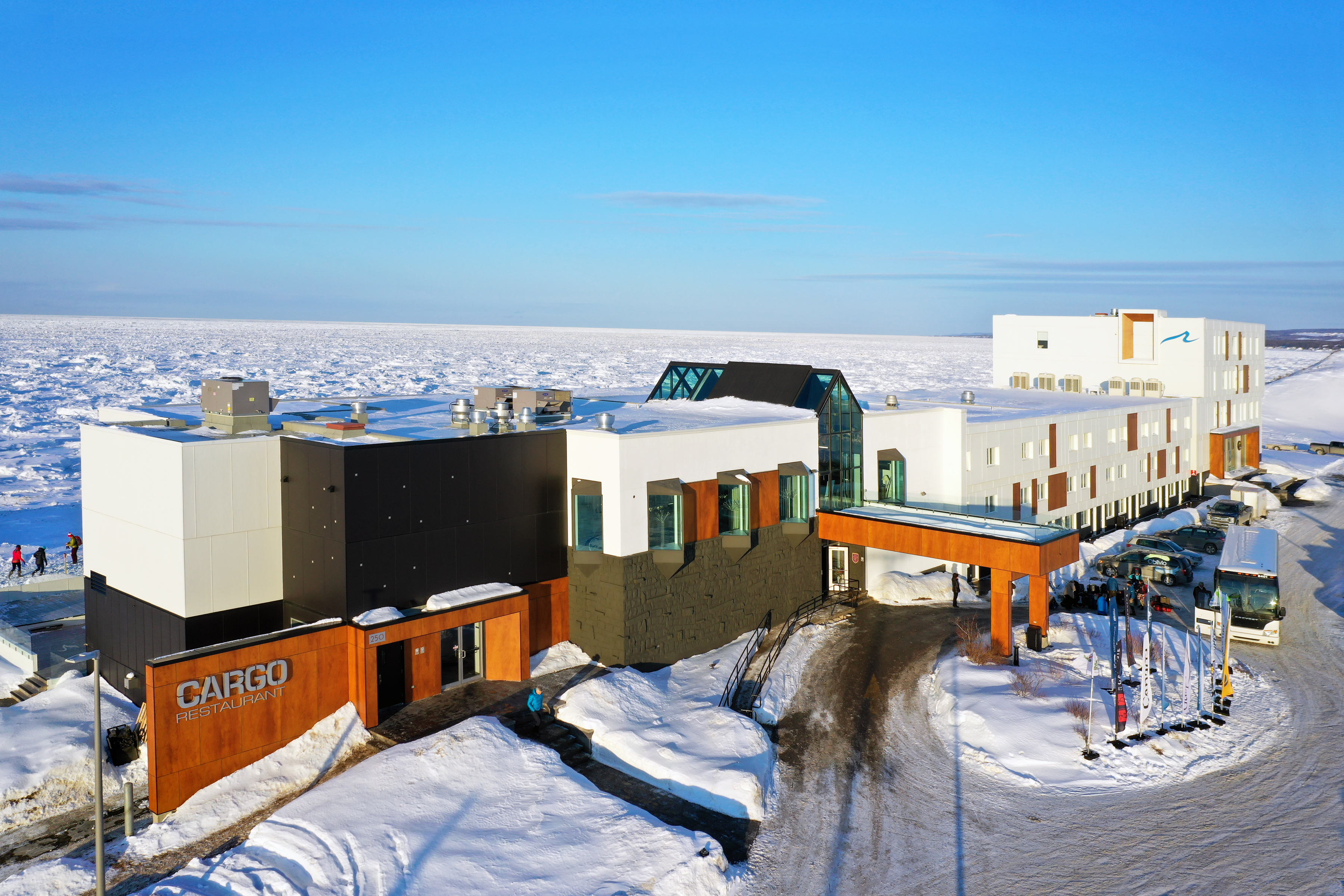 Install electric vehicle (EV) chargers for existing customers and develop a new cliente. That was the vision of François Rioux, President of Groupe Riôtel—a hotel group in the Gaspé Peninsula—that made each one of their Seaside Hotels a destination for EV drivers. This includes Riôtel Matane, Riôtel Percé and Riôtel Bonaventure. Being among the first to install EV chargers on their premises in 2010, the actions of the hotel group have made a significant contribution to zero emission tourism on its territory.

Riôtel Matane is a 120-room 4-star seaside hotel with a convention center and spa that welcomes guests year-round. Faced with the Covid-19 crisis, the hotel group has modified its opening hours and put in place a number of measures to ensure the safety of its clients and employees. Riôtel Percé and Riôtel Bonaventure, are seasonal 3-star resort type hotels, which normally reopen from mid-May to mid-October.

During this particular time, we took a moment to highlight the support Riôtel Group has given in regards to zero emission tourism in their coastal region of Quebec. What’s unique about our locations is its seafront access and views, explains Nathalie Blouin, Vice-President of Sales and Marketing at Groupe Riôtel, who played a key role in initiating the installation of the EV chargers. That’s what defines us, hence our trademark—Seaside Hotels.

“What’s unique about our locations is its seafront access and views.That’s what defines us, hence our trademark—Seaside Hotels.”

ChargeHub: Why did you prioritize the installation of EV chargers?

It’s funny, it was two coincidences that happened one after the other in 2010. At that time, I was the General Manager of Riôtel Group and I was also acting as the Interim Director of Riôtel Matane. One day I received an email from one of our corporate clients who had an electric car. He sent us a message saying something along the lines of: “Hello, I always enjoy doing business trips at your location but I’d like to suggest something: it would be nice if you had a charging station. It’s becoming more and more in demand.”

Not long after—I hadn’t even had a chance to mention this to Mr. Rioux—I received a call from Sun Country Highway (SCH), a company whose objective was to install EV chargers across Canada, from coast to coast. On the call, the SCH team explained that they would be in Matane in the following weeks and that they would like to install charging stations in our parking lots. Since we were a hotel group with several locations in the Gaspé Peninsula, they wanted to make an appointment.

Obviously, the timing between these two events triggered a spark in my mind. 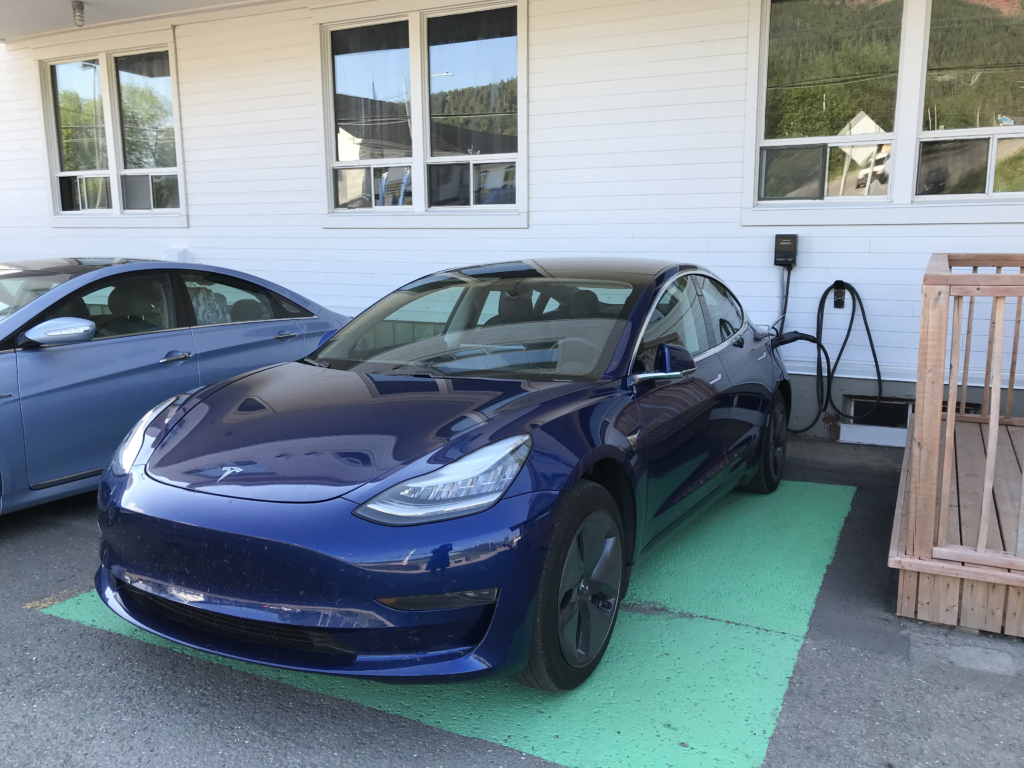 What steps did you take to install the EV chargers?

Today, there is much more expertise available given the strong demand and popularity of electric vehicles (EVs). But at that time, we had no idea where to buy an EV charger or how one worked…it was completely new to us. There was no one we knew that had advice on this either. As far as I remember, it was shortly after we installed the EV chargers that Circuit électrique installed fast charging stations downtown Matane, along with chargers at St-Hubert and Tim Hortons.

So Sun Country Highway was the one to explain the basics. After we received the EV chargers, I asked Mr. Riouk what we should do next. He answered: “We have to see if our place has enough capacity or if we need to add an electrical panel.”

So, we hired an electrician, and once on-site, he was able to tell where the charger could be installed if we installed an additional electric panel to power it. As a last touch, we painted the dedicated parking lots dedicated to electric cars green.

After that, a new adventure began.

Since you installed the EV chargers, have you seen a difference in your clientele?

Yes, of course. The EV chargers influence some of our clients’ choice. Being able to leave the electric car plugged in to go for a walk around town is an asset that our clientele really appreciate. Since we installed the first ones, we have added a new dual-port charging station in Matane to meet the growing demand of our customers. There was often an EV plugged in, so it was necessary. We also have two of them at Riôtel Percé and we are in talks to install Tesla chargers in the near term.

In fact, a client of ours is a member of the Club Tesla Quebec. Once, he called me to say, “I want to tell you that your charging network is really great. We went around the Gaspé Peninsula and the commute ended up costing us  $2.50! Through that, a partnership was developed over time. One of my best memories is when we participated in hosting the Tesla Caravan at Riôtel Percé for the Festival Musique du Bout du Monde‘ in Gaspé; a music festival that takes place in August.

At one point, Club Tesla Quebec called me and said “Natalie, we’re organizing the Tesla Caravan.” It was a caravan of people who came in electric cars to the festival with the aim of adding a sustainability theme to the event by promoting electric cars. At the time, there was also Téo Taxi who participated.  It was an electric escapade where Tesla owners and Téo Taxi brought  participants and artists like Sophie Faucher and Ines Talbi to the festival, driving in EVs from Montreal to Gaspé in small groups.

This experience also exposed us to new learnings in respect to EV chargers.  Since we had a group of 15 to 20 electric cars on site, there was a logistics component that we needed to account for. It’s also at that time that I learned that an electric car could technically be plugged into a regular outlet. However, that takes too long to charge the battery. And so, we had a schedule where EVs would rotate from our charging station in our parking lot and the fast charging station downtown. 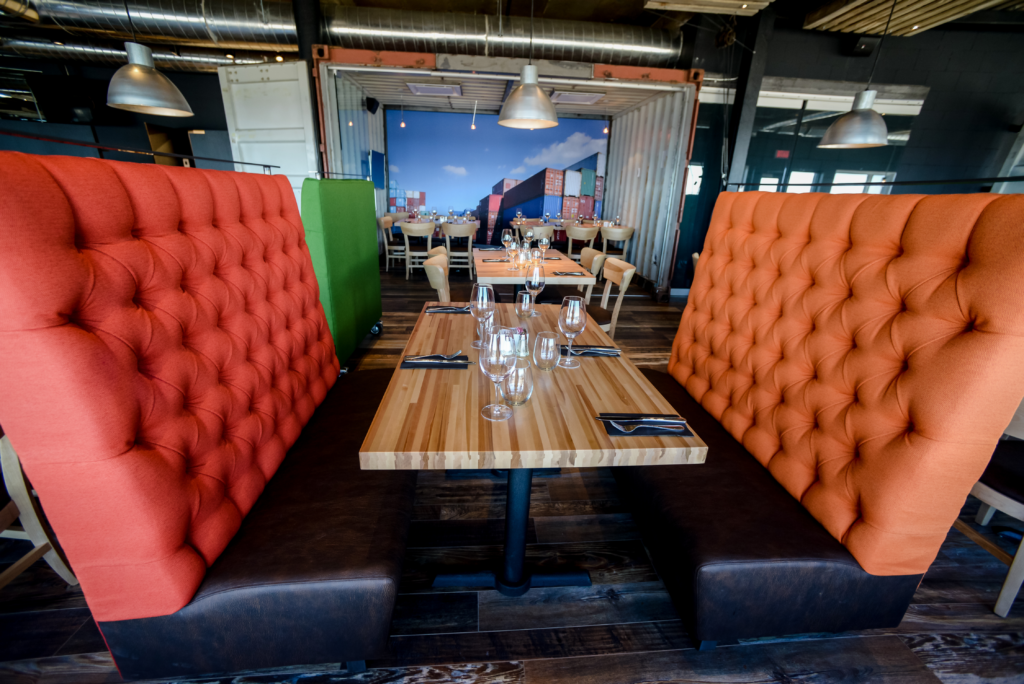 What level of maintenance do the EV chargers require?

Maintenance is fairly easy. The only thing we’re unsure about is when a client wants to plug their electric car and the charger is already occupied. When that happens, we don’t always know how much time to allocate to each client and what the charging needs are. As charging is free, this can happen… but it hasn’t been too problematic. In any case, if the demand continues to increase, all it does is signal us that we simply need to install more EV chargers— a nice ‘problem’ to have!

Eventually, it can also happen that someone who isn’t a client of ours uses our EV charger, which is less pleasant. However, on the rare occasions where it does happen, we have seen that the EV driver will still end up consuming on our sites as each one of our Seaside Hotels has a restaurant.

As for hardware maintenance, I would say that where we encounter the most difficulty is when a piece of equipment breaks. In these instances, it’s a sure thing we need to order specific parts. I remember that we had one of our EV chargers in Percé break. That wasn’t an obvious fix. We had electricians come in to check, but they don’t always know how to identify the source of the problem (which part needs to be changed and so on). Now it’s more common, however, and there are more standards among the EV chargers to facilitate repairs. So I would say, the level of maintenance ended up being a question of allocating time to searching for hardware parts and expertise. 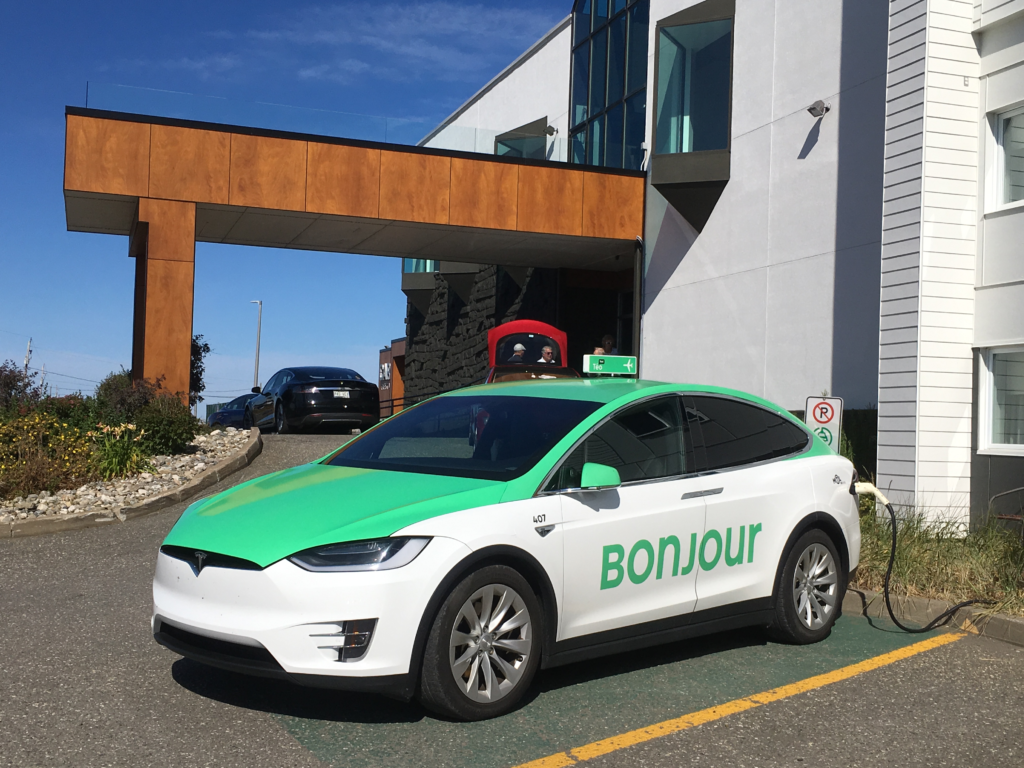 In addition to your efforts in sparking zero emission tourism, are there other sustainability initiatives that Groupe Riôtel has taken?

When we have to do renovations, the first question we always start with is: what can we recuperate? For example, we made great furniture out of salvaged wood washed up on the seashore on one of Mr. Rioux’s properties. The salvaged wood was worked by cabinet makers from the Gaspé Peninsula and it is this wood that makes up the reception counter of Riôtel Matane today; as well as the bar countertop and the small side tables. Our old canopy was also recovered to make the benches and small tables at our restaurant in Matane, named Cargo. This gives a contemporary industrial style, which is intended because Cargo was inspired by the cargo ships that pass every day in the port of Matane! We then complete each one of our renovations with energy efficient solutions such as intelligent heating and air conditioning systems.

Then, we focus on gourmet tourism by highlighting everything that is produced from the sea. Normally, our Lobster Festival takes place in the spring in all three hotels. There are also the famous northern shrimps of Matane that we promote in many of our menus. Anything we can get in continuous local supply, we take it!

This is one of the great successes of the hotel group: valuing the particularities of each location. Like the Riôtel Percé, located in the heart of the village, which offers a panoramic view of the Percé Rock and its surrounding cliffs. EV drivers can plug in their EVs and walk around, as well as eat at the hotel’s restaurant, PAQBO. Then, Riôtel Bonaventure, located in the Baie-des-Chaleurs, is a popular place for salmon fishing and canoeing sports on the Bonaventure River, one of the most crystalline rivers in North America. Hence the name of the on-site restaurant, the Kano.

Groupe Riôtel had planned their winter escapades that highlighted winter activities such as the Opti-Neige festival; a festival of ice sculptures appreciated by families in the region. However, in the face of the crisis, these winter escapes will be promoted next year. In the meantime, Riôtel Seaside Hotels continue to transmit their love of the Gaspé Peninsula and the sea to their clientele, who can’t wait to come back for a vacation or a business trip, where a rejuvenating coffee break on the beach is only a few steps away.